Back in January I posted to this blog my thoughts on what form background processing might take in iPhone OS. I proposed that we would not see what you might consider, "full multitasking", but went on to explain why I didn't think we needed it (and that that would be a good thing) and what should happen instead. Yesterday Apple announced iPhone OS 4 and the headline feature, of course, was multitasking. So how did my musings (and those of the commenters to that article) stack up? 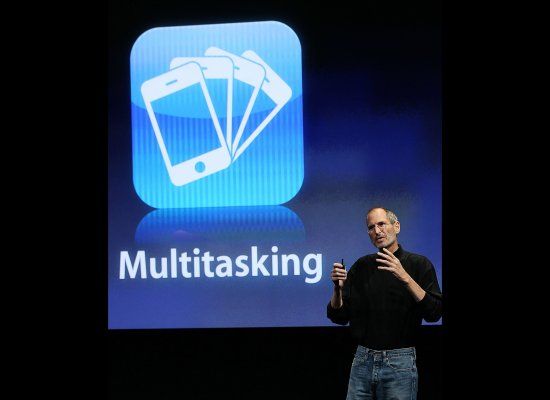 I listed three primary areas that most multitasking usages involve:

1. Background apps, such as music players. The iPod app does run in the background, of course, but there is certainly a case for third-party apps such as Spotify or Last.fm to have the same ability.

This was the first multi-tasking service discussed - the background audio service. Pandora was the poster child.

2. Notifications. This is at least partly addressed by the Push Notification service that Apple now provides. More on that in a moment.

I went on to discuss in more depth what I meant by this and Apple have implemented this exactly as I proposed (although it is conceivable that they arrived at this concept independently). They have called it Local Notifications.

I also went on to suggest that this is what most people want most of the time they lament the lack of multi-tasking. App switching has always been fairly smooth on the iPhone and iPad, but new services to allow apps to persist and restore their state quickly make that process really seamless - and even allow apps to respond to beings switched back to (the example given was of playing Tap Tap Revenge which, when switched back to after switching away, has paused the game and gives a 3 second countdown before resuming again).

I felt that these were probably the biggest uses of multi-tasking that could be provided without disrupting the performance and battery life. They are not the only areas, of course. I invited people to suggest other areas that could be served in a similar way.

The first comment I received was from Graeme Foster, who said:

And the second, from James Webster, said:

Running the GPS and a background app would be battery intensive

I'm sure Apple were reading these comments. They have addressed both of these concerns. There are two background location services. One is based on cell tower triangulation and is aimed at Graeme's use case. The other is full on location services - aimed at navigation apps - which assume the device will be connected to power - so acknowledging James' concern.

One use, which wasn't mentioned by me or my commenters, but I did see discussed elsewhere, was for VoIP apps, such as Skype - and it was nice to see this catered for too. In fact I wonder if it becomes possible to use an iPod touch just like a normal phone now!

Another feature that I didn't bring out (but others did) was completion of upload tasks. In retrospect this is perhaps the most important from my own perspective. In another iPad related blog post I alluded to an app that I'm working on that fits the iPad like a glove (no, not literally). I'm still holding my cards quite close on that one, but what I will say is that it involves cloud syncing. The trouble with cloud sync enabled apps right now on iPhone OS is that the syncing tends to happen in the background. If the user closes the app while the syncing is in progress then, at best, the app will not be fully synced up and the "cloud" version will be out of date. At worst, if not carefully designed, data corruption may result.

iPhone OS 4 includes a service called Task Completion and this solves the problem cleanly. Tasks such as syncing and uploads that are kicked off while the app is running can continue to completion in the background even after the app is closed. This was one area that I was agonising over for my app and I'm really pleased that it is solved in OS 4.

Finally, one of my commenters, Yitz, posted an interesting link to his own blog with his views on another "iPhoneOS multi-tasking alternative". In fact the bulk of his post was arguably not about multi-tasking as such, but rather about allowing developers to write services that other apps could call into. In retrospect this is now somewhat provided for by the QuickLook framework.

So, in summary, Apple's multitasking features include everything I expected, everything I hoped for and everything I dared not dream of (or, indeed, blog about).