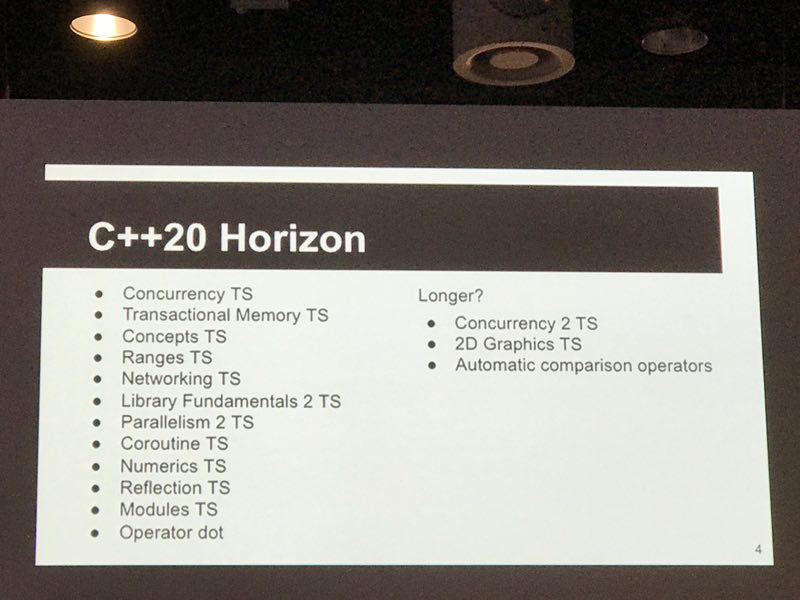 From Mark Isaacson's Meeting C++ talk, "Exploring C++ and beyond"

I was recently interviewed for CppCast and one the news items that came up was a trip report from a recent C++ standards meeting (Issaquah, Nov 2016). This was one of the final meetings before the C++17 standard is wrapped up, so things are looking pretty set at this point. During the discussion I made the point that, despite initially being disappointed that so many headline features were not making it in (Concepts, Modules, Coroutines and Ranges - as well as dot operator and uniform call syntax), I'm actually very happy with how C++17 is shaping up. There are some very nice refinements and features (const expr if is looking quite big on its own) - and including a few surprise ones (structured bindings being the main one for me).

But the part of what I said that surprised even me (because I hadn't really thought of it until a couple of hours before we recorded) was that perhaps it is for the best that we don't get those bigger features just yet! The thinking was that if you take them all together - or even just two or three of them - they have the potential to change the language - and the way we write "modern C++" perhaps even more so than C++11 did - and that's really saying something! Now that's a good thing, in my opinion, but I do wonder if it would be too soon for such large scale changes just yet.

After the 98 standard C++ went into a thirteen year period in the wilderness (there was C++03, which fixed a couple of problems with the 98 standard - but didn't actually add any new features - except value initialisation). As this period coincided with the rise of other mainstream languages - Java and C# in particular - it seemed that C++ was a dying language - destined for a drawn out, Cobolesque, old-age at best.

But C++11 changed all that and injected a vitality and enthusiasm into the community not seen since the late 90s - if ever! Again the timing was a factor - with Moore's Law no longer influencing single-core performance there was a resurgence of interest in low/ zero overhead systems languages - and C++11 was getting modern enough to be palatable again. "There's no such thing as a free lunch" turns out to be true if you wait long enough.

So the seismic changes in C++11 were overdue, welcome and much needed at that time. Since then the standardisation process has moved to the "train model", which has settled on a new standard every three years. Whatever is ready (and fits) makes it in. If it's not baked it's dropped - or is moved into a TS that can be given more real-world testing before being reconsidered. This has allowed momentum to be maintained and reassures us that we won't be stuck without an update to the standard for too long again.

On the other hand many code-bases are still catching up to C++11. There are not many breaking changes - and you can introduce newer features incrementally and to only parts of the code-base - but this can lead to some odd looking code and once you start converting things you tend to want to go all in. Even if that's not true for your own codebase it may be true of libraries and frameworks you depend on! Those features we wanted in C++17 could have a similar - maybe even greater - effect and my feeling is that, while they would certainly be welcomed by many (me included) - there would also be many more that might start to see the churn on the language as a sign of instability. "What? We've only just moved on to C++11 and you want us to adopt these features too?". Sometimes it can be nice to just know where you are with a language - especially after a large set of changes. 2011 might seem like a long time ago but there's a long lag in compiler conformance, then compiler adoption, then understanding and usage of newer features. Those just starting to experiment with C++11 language features are still very common.

I could be wrong about this, but it feels like there's something in it based on my experience. And I think the long gap between C++98 and C++11 is responsible for at least amplifying the effect. People got used to C++ being defined a single way and now we have three standards already in use, with another one almost ready. It's a lot to keep up with - even for those of us that enjoy that sort of thing!

So I'm really looking forward to those bigger features that we'll hopefully get in C++20 (and don't forget you can even use the TS's now if your compiler supports them - and the Ranges library is available on GitHub) - but I'm also looking forward to updating the language with C++17 and the community gaining a little more experience with the new, rapidly evolving, model of C++ before the next big push.