As promised, here are my current thoughts on the iPad - as developed on from my thoughts of four months ago.

I still find the screen too glossy and hard to read in some circumstances. This has been somewhat mitigated by the onset of autumn as my train journey is usually in the dark or half-light. However, now that I'm used to the iPhone 4's retina display I'm also very distracted by the sight of all those rough edges and pixels. I'm sure they weren't there before.

As I understand it there are some rather large technical challenges to bringing retina display technology to a panel the size of the current iPad. I do wonder if this feeds into some of the rumours of an upcoming 7" iPad (or other smaller form factor).

On the flip side I've found that, with the retina display, the iPhone is now even more useful in some situations where I might otherwise have preferred the iPad - e.g. reading. It's now almost as comfortable to read material on the iPhone, at the higher resolution, as on the iPad - and without those distracting pixels.

With this in mind I think I would welcome a smaller form factor (as an option in a range) - as long as it had higher pixel density (ideally "retina" level).

Aside from the screen, we've certainly seem a lot more apps targeting the iPad. Some more successfully than others. We're seeing innovation in this area and its an exciting time - but I think for the casual observer it's still a bit too early to really benefit. Unless you have something specific in mind I'd advise holding off to see what the next generation - or possible an upcoming competitor - hold. If you just want an eReader I think the latest Kindles are a good bet - and needn't preclude getting a next gen iPad later.

I think that is the mark of something truly new. We're finding our feet as a community. The hype behind Apple and the iPad seems to be sufficient to keep the momentum going until we reach the next level.

It's also been interesting to see how other vendors have responded. There has been the inevitable glut of cheap knock-off clones, of course. But I think we're starting to see some real contenders. The Android space has really taken off this year. In some ways Android is even ahead - but I think Apple is still leading on innovation at this point. There are fundamentally different philosophies behind Google's approach and Apple's. But you can't deny that that Google are following the strategy that Jeff Attwood recently coined as, "Go that way, really fast". Even Blackberry are making credible contributions to the space (or are they?) - focusing, as is their wont, on the business side of things.

Competition is good. Not just because it will encourage Apple to keep innovating, and keep iterating. I genuinely think this area of computing is the one to watch. It's only just getting off the ground. I think Apple will be the thought leaders in the space for a little while yet, but it would be unhealthy for that to remain so in the long term. That was less true of the iPhone, but I still think it's good that competitors are catching up there too (and ahead of schedule). The reason I think Apple are still ahead is that they control the end-to-end user experience and that is, right now, critical. That may not always be the most important factor.

But back to the specifics of the, current, iPad. Most of the areas I commented on in the previous post were software related. I now have iOS 4.2b2 installed. How has that changed things? Well I can't talk about specifics, beyond what has already been advertised, as it is still under NDA. But I can say that just between Multitasking and Folders alone I can't imagine going back to 3.2. I actually jumped on 4.2b1 as soon as it came out - despite my usual policy of not installing first betas, if any, on devices I use in daily life (I have an iPod touch and an older iPhone specifically for testing). Android users will be quick to point out that corresponding features have been available on that platform for some time. Not having used them I can't comment, but I have heard that the experience is less satisfying.

However, despite all this I have to say that I've been using it less than I was even four months ago.

Well, in part, it's a matter of time. My typically daily computing experience is something like this: 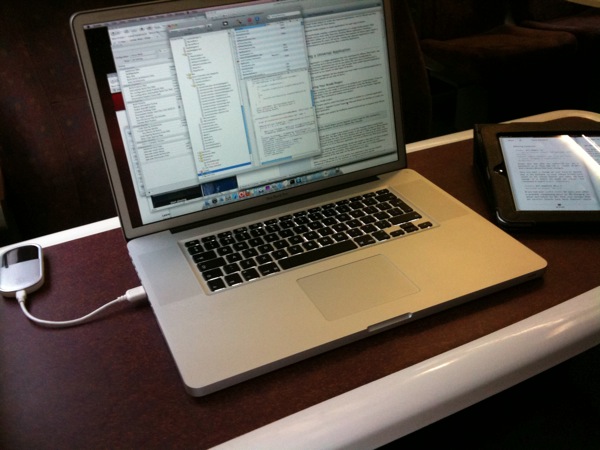 Morning:
Catch up on Twitter on my iPhone while waiting for the train. Development (or writing blog posts) on my laptop on the train. I sometimes use the iPad for looking up reference material as the internet connection is more stable than my 3 Mi-Fi

Day:
Work on a PC running Windows. Occasional emails and Twitter checks are catered for by the iPhone. Music supplied by the iPhone.

Evening commute:
Catch up on Twitter on my iPhone while waiting for the train. Development (or writing blog posts) on my laptop on the train.

Evening at home:
Watching an episode of something (currently: Lost) from my Mac Mini (possibly soon to be my Apple TV 2) while having dinner. Occasionally a little more development on my laptop, or downloading iOS betas. Sometimes some reading in bed - either on the iPhone or the iPad.

So there is not a lot of scope for the iPad to make inroads there. Currently the only regular appearance is the late night reading - which the iPhone is often more convenient for anyway. I didn't mention, too, that I sometimes use the iPad during the day as a photo frame, but it has been disappointing even in that capacity as there is, currently, no way to change the update frequency (iOS4.2 may or may not address that - I'll say no more) - and no way to create photo albums on the device. If these things are addressed I will probably use it more for that - but that's hardly revolutionary.

Once my Apple TV 2 arrives and AirPlay starts working I may well use the iPad as a source for that too - but the iPhone may serve that role just as well.

So, in summary, I'm making it sound as though the current iPad is much less useful than I had originally hoped for. There is some truth in that. I think an option of a smaller form factor and/ or a high density display will help there. But I think another obstacle has just been my time to find apps that make better use of what the iPad has to offer (this would be true of any tablet device) - and more importantly - to write my own!

The time for the iPad is, maybe, yet to come, but the revolution has already begun