Could the Internet please stop changing while I finish this blog post?

Whenever I write a blog entry I iterate it a few times - minor corrections here, typographic fixes there - or often rewriting (or deleting) large chunks of it.

Sometimes I'll have a half-finished entry in draft and come back to it months later - only to make substantial changes to it.

Normally I wouldn't mention that in the final version (with this previous exception). But on this occasion the changes reflect the mercurial nature of the subject matter so nicely that I hope you'll forgive a brief aside.

I'd started an entry about a year ago with the title, "Welcome to the semi-connected age". It was meant to be a summary of the current state of the art in "connected" apps, including the stand-off between web apps and native apps - all leading up to my take on it and what I'm working on in that area.

I'd already written a lot.

But when I picked it up a couple of week ago to see if I could finish it I realised that just about everything I touched on in it had changed! I had referenced Silverlight as a way forward with much potential (it has since been sidelined as a desktop web technology), Mono (in connection with Moonlight, in particular) - just had it's staff laid off, and the inadequacy of Javascript and HTML (Javascript is a belatedly rising star and HTML5+CSS2/3 has been thrown into the mainstream despite not having settled into a standard yet). I even touched on Dropbox as being the poster child for cloud storage (they have since been embroiled in security concerns).

So I started again from scratch, with a piece called, "That syncing feeling". But even before the end of that day things were changing again! Microsoft started showing off Windows 8 - which pushes HTML5+CSS3+JS even further into the limelight on the desktop - much to the dismay of Silverlight developers. And Apple confirmed that they would be launching iCloud at the, then, following week's WWDC. That's what prompted the tweet that I took the title of this post from.

I thought it might be better to wait until things had settled down a bit.

And I'm glad I did. The WWDC Keynote has really stirred things up. I'm not sure if most people really "get" why, yet. But what I find reassuring is that Apple seem to be moving in exactly the direction that my original post was trying to promote.

So that brings us full circle. I can now put my points across, but this time with Apple to back me up. 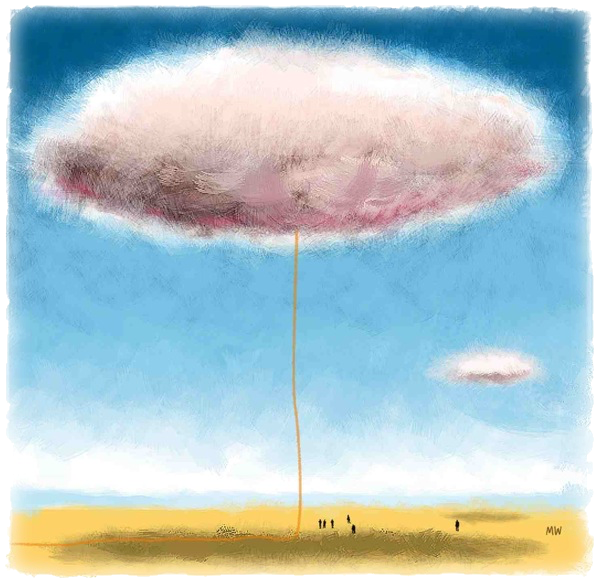 Even after writing that intro I've abandoned the rest of this post and restarted from scratch a couple of times. There's plenty on the cutting room floor for follow-up posts.

I'm going to use this post to cover why I see Apple's iCloud services as doing it right where some people see shortcomings.

What are these "shortcomings"?

iCloud is about transferring and syncing data. It's about being the canonical store of that data. I've seen a number of complaints that this is not really "the cloud", and that Apple are giving us a half-baked solution. What is the other half? The True Cloud, they say, hosts the apps themselves - not just the data (we'll ignore the MobileMe apps for the moment).

I couldn't disagree more! Why?

First. Even web apps run on your local machine. They might be hosted on a server but they are effectively deployed to your desktop/ device every time you use them! Caching may play a role here, but that's really just a deployment performance tweak.

So a web app is just a Javascript (or some RIA language) app that is continuously deployed then interpreted on your desktop. It has some cross-platform advantages, due to being browser hosted - although it does trade these for cross-browser issues instead.

Second. Writing a good, responsive, sophisticated web app is hard. Harder than the equivalent native app. But getting sync right between distributed clients is harder. Much harder. It could be argued that no-one has got it quite right yet. You could make a case, and this is my position, that hosting data for distributed native apps is The True Cloud. Web apps, in a way, are the half-baked solution.

So, what are the pros and cons of each?

Pros: Can work disconnected. Can be much faster. Matches look-and-feel of your chosen platform. Integration with other apps.
Cons: Installation/ Updates can be more onerous or require user action and take time. Must deal with sync issues.

In my earlier drafts I went into much more detail on these points - especially connectivity (e.g. RIA technologies that allow disconnected working). But this time I'm just going to jump straight into how last week's WWDC announcements change the score:

But let's add a third category

Pros: Can work disconnected. Can be much faster. Matches look-and-feel of your chosen platform. Integration with other apps. One click install, automatic pushed updates using delta patches (fast!). Sync issues taken care of.

What happened to the Cons field? Well you might still have some reasons to prefer web apps - such as the cross-platform promise. But for me, at least, now there are no cons! Especially if you combine native apps with web-hosted versions. That makes senses for PIM apps, like contacts, email and calenders. Maybe it makes sense for productivity apps too, like word processors, spreadsheets and slide presentation apps.

And guess what, Apple has cloud hosted versions of all those too - which work seamlessly with their native counterparts. At time of writing the future of these is uncertain, but I think it highly likely that they will continue to exist.

Best of all worlds?

Maybe. It does severely lock you into Apple's products, of course. I'm a big fan of Apple hardware and software in general - but this is something that must transcend a single company. They're not doing anything new at the small scale but, at the moment, it's only really Apple that have everything necessary to be able to pull this off end-to-end. I hope that in doing so they pave the way for the community to piece together a more coherent alternative picture. We have all the components out there. Many of them better than Apple is offering.

There are those who have been claiming that iCloud does not sync, but merely pushes content that it holds down to devices. It's true that Jobs didn't use the word, "sync" in his WWDC Keynote coverage. In fact he seemed to be specifically avoiding the word. Does that mean there really is no syncing capability in iCloud?

Well remember that, whether iCloud assimilates the MobileMe services that sync contacts, mail, calendars, etc. But even for the new services sync is fundamental to how they work. You add a song on one device, the other devices get it (which may involve the song being uploaded). You take a photo on one device, it gets synced to other devices.

However these new services seem to be designed in such a way as to avoid, or at least minimise, the possibility of conflicts. If it was just a case of holding songs and photos in a file system and then syncing the file system then all those thorny conflict resolution challenges that are traditionally associated with sync arise.

But Apple have been very careful to keep away from those issues by managing the content at a higher level. Jobs seemed particularly proud when he said, "A lot of us have been working for 10 years to get rid of the file system". This is not just about simplification - it's about the file system being the wrong tool for the cloud - and I say this as someone who has worked for a file-based Cloud Storage company.

It's this "post-file-system era" that is central to what I'm going to cover in more detail in a future post.