Welcome to the new decade

What makes a tweet take off? I recently had a tweet go viral and it gave me a fascinating insight into the how and why these things spread. In some ways Twitter amplifies existing social epidemiology. In others it is unique.

So what was the tweet? It was a Saturday afternoon - about 4pm here in the UK. I was having a shower (where most of my best ideas are formed) and I was thinking about recent tech news. It struck me that recent events (Oracle suing Google over Java, Google net neutrality controversy with Verizon) have added to other changes (Apple's rise to the top of the mobile, online music and tablet spaces - and even eBooks - and Microsofts inability to get into - or back into - and of these area) has resulted in a reversal of some of the positions we have taken for granted over the last ten years or so.

So, as I was drying off, I posted a casual message on Twitter. I had around 200 followers at the time - at least half of whom I know personally. I thought I might even get a couple of retweets.

Welcome to the new decade: Java is a restricted platform, Google is evil, Apple is a monopoly and Microsoft are the underdogs

That's 125 characters to summarise the juxtapositions I had been pondering. Like most tweets where several thoughts are being conveyed it took a couple of iterations to prune it enough that it fit into the 140 character limit - and leaving just enough space for the RT.

After that I took my family off to my sister's, where we had been invited for the evening, and didn't think any more of it.

My sister's house is a bit of a 3G (or any G, for that matter) blackspot. If you've seen those adverts for femtocell repeaters that have people hanging out of windows to get a signal then you have an idea of what it's like.

However, even there, my Magical iPhone 4 antenna occasionally picked up a signal and I'd get email in bursts. During the course of our meal I heard a few emails popping in and took a look. My unread emails badge told me I had 50 emails waiting. 50! As it turns out, 50 is the maximum number of email headers the iPhone will download automatically. I don't know how many I already had at that point. But it was a lot.

So what where they? They were notifications from Twitter of new followers.

I managed to get a connection to my brother-in-law's wifi - which has a 128 character hash as a password (!) - and checked in on my twitter account. And there it was. Screen after screen of my tweet retweeted over and over again! A three letter word came to mind. It starts with W and ends with TF!

I couldn't investigate fully until I got home. By that time I found I was #1 in two categories on Reddit - and later found I had also been #1 on Hackernews all night! A little more searching showed the tweeting popping up in other places too, mostly blogs. By monday I heard I'd even had a mention on "This Week in Tech".

By Tuesday (already three whole days later) I was still seeing retweets in my timeline every few minutes, and new followers were trickling through. They seemed to have levelled out at around 900 (some people were already unfollowing) - but then over Tuesday night (UK time - so day/ evening across the US) it picked up again leaving me with 930 by Wednesday morning.

Tipping Point? Or Life Of Brian

If you've not read Malcolm Gladwell's Tipping Point you're probably at least familiar with the phrase, or can take a guess at what it means. It's all about the factors that contribute to the adoption or awareness of something taking off - usually by several orders of magnitude. Almost by definition this is not an exact science. If you want to paint a scientific face on it I'd probably paint it with Chaos Theory. In practice the elements that Gladwell covers tend to be more sociological, and usually highly anecdotal.

But a tipping point seems to have been what was reached here - so what does Gladwell have to say about the process?

Probably the most obvious example of a Tipping Point factor are Gladwell's: "Connectors". These are people who have a lot of social connections. They know people. (Even more) people know them and generally trust their opinions. Often these people will be celebrities or with some other form of media presence. Book authors, tech journalists or high profile employees of big name companies are common Connectors in the tech world. There were certainly a number of these in the mix and they would have played a huge amplifying role in the process. I can't imagine my tweet would have "tipped" without them. Some of the names I've seen are: Robert Scoble, Leo Laporte (who had mentioned me on TWiT and Travis Swicegood (author of "Pragmatic Version Control With GIT", and who posted the tweet to Hackernews). With a bit more digging I'm sure I'll turn up more, perhaps even bigger names.

Gladwell also talks about Mavens and Salesmen. In this case I believe the Mavens involved where probably also the Connectors. Salesmen have less of a role in a Twitter epidemic.

Gladwell's concept of the "Stickiness Factor", I believe, translates to the quality of the tweet that led it to take off in the first place. After all it needed enough momentum to reach the connectors.

In retrospect I can have a good stab at what it was about the tweet that gave it Stickiness. I want to emphasise that I can't claim credit for how effective it turned out to be. That was mostly down to luck and the constraints imposed by Twitter itself.

Twitter's famous 140 character limit, while it has other historical reasons, has proved to be one of its most compelling (and sometimes frustrating) "features". It's an oasis in today's crisis of information overload. Anything else is tl;dr.

And yet at the same time we are addicted to content - especially social content. We want more of it, but in smaller amounts. And that's precisely what Twitter gives us. Furthermore we are forced to think about how we can keep within that limit - compressing paragraphs of material into a couple of laser focused sentences. We often surprise ourselves at how much unnecessary waffle we can distill down to essence of the point we wanted to make.

And that's exactly the process I went through to arrive at the wording in my tweet.

But it wasn't just the fat that was trimmed. There was no room to explain the nuances, resolve the ambiguities, or balance the controversy. Twitter editing is brutal. It has to be left to the reader to add the flesh back to the bone.

Anyone familiar with recent events in the tech world could identify with the sequence of statements - whether they agreed with them or not. But each person also read into them their own interpretation. Some took exception to what they thought I was implying. This was important. If you look at the discussion threads that exploded on Reddit and Hackernews you'll see how many possible interpretations and opinions about each word were represented.

It's a sad, but well known, fact that controversy "sells". Each point I made had enough truth that it could be talked about in serious debate, but was controversial enough that people wanted to do so. The fact that each point was also a reversal of a previous view was the light and amusing packaging for this combustible concoction. Top that off with the easy to read meter, practically forced on it by the Twitter limit and it's hard to imagine a more carefully planned Stickiness assault on the Twitterverse.

Yet it really wasn't planned that way.

We've looked at the general Gladwell effects that probably contributed to the tweet "tipping". Considerable research has also gone into to more specialised effects within the context of retweeting. What makes the difference between something being retweeted 0-5 times compared to something that takes off to hundreds, thousands, or more?

Perhaps the most notable Social Media expert in this area is Dan Zarrella. He has broken down vast numbers of statistics and correlations and come up with some key observations. These include things such as the type of words that are most retweetable, sentence structure, time of day, day of week, and many more. Some of the effects are more pronounced than others.

Looking at the timing: Dan suggests the best time of day to be retweeted is sometime in the early evening. According to his graph this peaks about 5pm. Sure enough that was almost exactly the time I posted. So that goes to prove the point? Well it would be a mistake to look at a sample size of one and draw conclusions. There are also problems with this statistic. Twitter is a global phenomenon. Most people have at least some international members of their network. So time-of-day is all but meaningless. In my case, being based in the UK, I think 5pm worked out well because the U.S. was coming online and spread throughout the day.

I was a little surprised that he didn't even mention, at least in the linked article, network effects of the Tipping Point variety (although arguably most of his findings relate to the Stickiness of the content).

As this saga unraveled I became more and more fascinated with it. I wanted to see how many times it had been retweeted, by whom, seen by how many, and who the Connectors were. There are tools online to help, but they are constrained by Twitter limits (for example only the last 1500 tweets from a search). To get around this I made multiple searches using the since: and until: commands. Unfortunately these only work for dates - not times. On Sunday I had more than 1500 retweets in the final eight hours alone!

So I wasn't able to piece together the whole story, but by throwing in a few estimates for the missing data I arrived at a figure of about 3-4 million impressions (that is, people who would have seen the tweet, given the followers of those that retweeted - allowing for overlaps).

I think the first big Connector in the mix was Robert Scoble, about 3 hours and 30 retweets in. During the rest of saturday evening it was picked up by five others with more than 10k followers each - including @toptweets with 354k followers alone! I suspect Sunday had the most Connectors at play. Unfortunately most of Sunday is a bit of a black hole due to those Twitter limits. 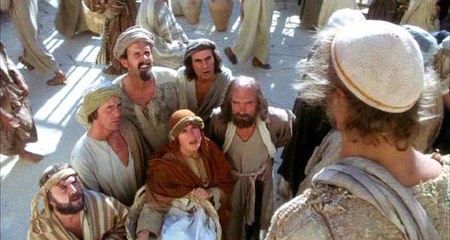 Blessed are the cheesemakers

At times it seemed like I'd got trapped in Life Of Brian - only with less Romans. When anything plays out on a large enough social network; the thing itself takes on a life of its own - detached from its origins. This was Dawkins' memetics at play in a highly concentrated form. But being so accelerated, even a network as large as Twitter reaches saturation fairly quickly. I was amazed that by Wednesday I was still being retweeted so much, but by Friday it was finally abating - with only about 3-4 retweets an hour.

By next week it will have gone the way of the dinosaurs. My days as a micro-celebrity are numbered.